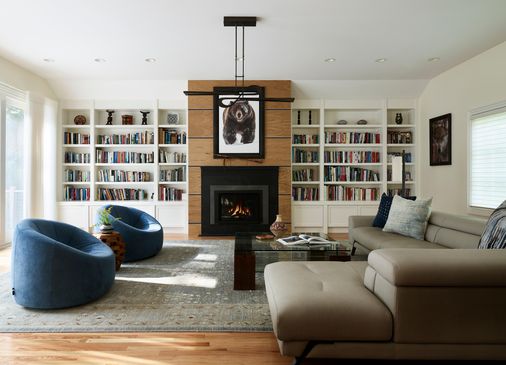 Just before Michael Kim of MK Architecture and David Cohen of Hampden Style and design + Design reworked this 1964 addition to their client’s 1938 Colonial in Weston, there was a laundry home in a corner, a reduced ceiling, and confined accessibility to the property. Nothing at all about the space felt correct. Immediately after using the area down to the studs and simplifying the shell, the pair established a tranquil sitting space with an inconspicuous backdrop of designed-in bookshelves and a focal issue-worthy fire. “Now the space appears like it is meant to, like it’s normally been this way,” Kim says. “That was the stage, that was our assignment.”

1. A rug with Eastern flavor from Dover Rug & Dwelling gives refined colour and a pattern that echoes the homeowners’ international sensibilities.

2. Deep blue Pumpkin chairs by Pierre Paulin for Ligne Roset are a sculptural assertion that balances the heft and neutral colour of the sectional.

3. Kim created the bookshelves, which he phone calls the room’s “supporting actor,” to be as visually silent as possible. “They’re not intended to call interest to on their own,” the architect says. “Their perform is to spotlight the homeowners’ artifacts and publications.”

4. Cohen refaced the stone veneer chimney with 11-inch-vast white oak boards divided by skinny strips of ipe established within just aluminum channels. “We at first tried using oak floorboards, but the influence was too chaotic,” Cohen says. “This has the identical organic texture, but seems substantially calmer.”

5. Thomas D. Mangelsen’s minimal-version photograph of a grizzly bear in Yellowstone Countrywide Park hangs more than the fireplace and a Indigenous American peace pipe rests on the mantel.

Marni Elyse Katz is a typical contributor to the Globe Magazine. Ship reviews to [email protected]