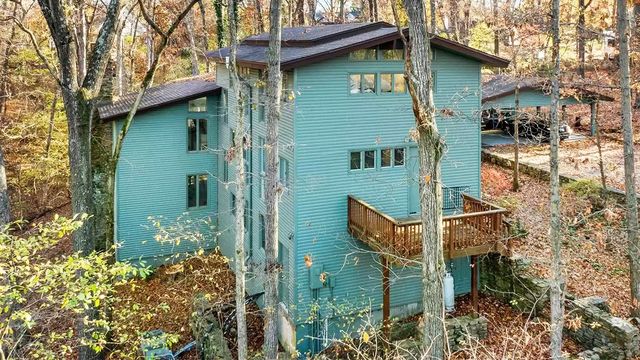 Now, thanks to a renovation by Dave and Jenny Marrs of HGTV’s “Fixer to Fabulous,” the home’s value has nearly doubled.

Listed just a couple of weeks ago for $725,000, the 3,665-square-foot home is pending sale—with an offer that was likely over the asking price.

Featured in the third episode of the show’s first season, the residence is a shining example of the value of a reality TV remodel.

The four-bedroom home built in 1973 was “honest-to-goodness one of my favorite projects,” Jenny wrote on their blog, Good Table. Prior to the Marrses’ involvement, the home was blessed with good bones, plenty of natural light (provided by 106 windows), and a leafy 1.2-acre lot just minutes from downtown.

But there were issues, she noted. “The existing interior still felt heavy and cramped,” and it was weighed down by a ’70s aesthetic, including closed-off rooms, dark paint, and dated fixtures.

In their makeover, the Marrses left the cooler elements—including an elevated stone fireplace and vaulted ceilings—intact while freshening them up with lighter paint. They preserved the dark wood on the beams for their warmth.

One of the couple’s most impressive improvements involved opening up the great room and expanding the kitchen.

The deck was also expanded to create space for cooking and entertaining.

The barbecue area features custom shelving to store firewood and even a Kegerator. That was a tip of the cap to the homeowners, who own a local brewery.

The Marrses’ work on the primary suite was also a huge highlight of the episode. The space now features a private patio and a large bathroom with modern fixtures and a barn door.

Bonus spaces like a new powder room, a walk-out basement, an office, and a loft also make the home a standout.

“We absolutely loved working … to update their home in order to highlight the gorgeous tucked-away-in-the-woods setting and the fantastic midcentury architecture,” Jenny said.

The post Home From ‘Fixer to Fabulous’ Season 1 Hits the Market in Arkansas for $725K appeared first on Real Estate News & Insights | realtor.com®.