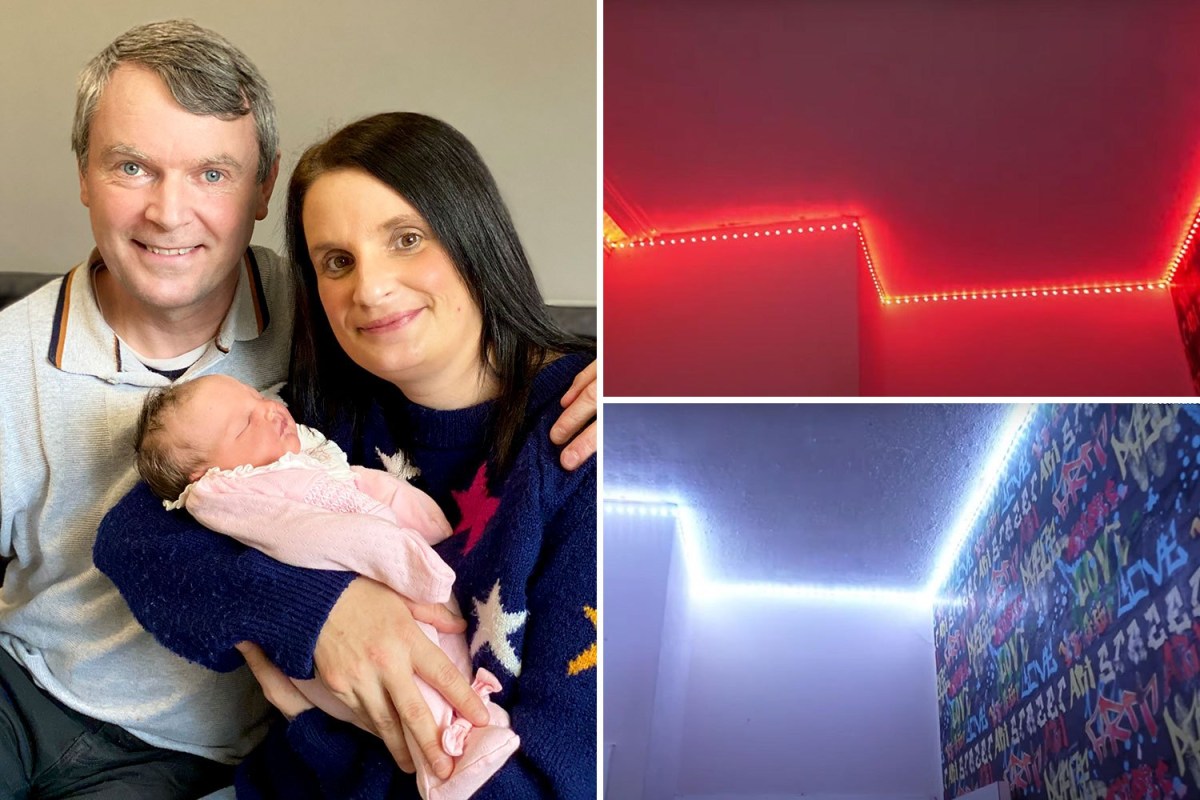 BRITAIN’S biggest family the Radfords have updated their fans on their huge home renovation, including a very swanky new feature.

Dad-of-22 Noel took to the family’s YouTube channel where he revealed that he had installed colour-changing lights in Josh, Tillie and Katie’s rooms.

Noel had picked up a couple of rolls of LED strip lights to go around the coving in each of the rooms.

The lights, which can be picked up on Amazon, can be purchased for about £16 a roll on Amazon and come with a remote control so that you can choose the colour that best suits your mood.

Aside from the fancy new lighting, dad Noel revealed the progress on the renovations of the former care home in Morecambe, Lancashire.

He revealed that the plasterers had managed to cover the hole that he had previously made in the wall, but there was still a way to go.

Speaking in the video, he said: “There’s still quite a bit to do by the looks of it, there’s still a lot more boarding to do probably three times more than what’s already been done.

“We’re getting there slowly but surely.”

The Radford family have some massive renovations planned for this year which will no doubt give them all a cool new space to lounge around in.

The parents have slowly been chipping away at the huge home sprucing up one room at at time, and most of the kids now have a fresh, new bedroom to spend time in.

The Radfords live in a 10-bedroom former care home which is spread over four storeys.

The busy parents, who support themselves with a bakery and don’t rely on benefits, currently have 19 of their kids living under their roof – which can’t have been easy during lockdown.

This includes Millie, 19, who is still at home after giving birth to her first child Ophelia in September.

Vote for your Fabulous Mum of the Year and WIN

Do you know a mum who deserves some extra recognition? We want to pay homage to the best mums in Britain.

During the pandemic they’ve been busy juggling childcare, homeschooling and work, with the added stress of worrying about the health of elderly relatives and vulnerable friends.

It’s never been a harder time to be a mum, so this year it’s even more important to honour the amazing women in our lives.

Nominate her for our Fabulous Mum Of The Year Award and she could win an overnight stay for two at a Champneys spa of her choice complete with a Gold package, which includes four relaxing treatments for the ultimate pampering experience.

Two runners-up will Champneys goodie bag worth £50 plus a £100 M&S voucher and £200 Nutmeg at Morrisons voucher, and all three mums will enjoy a makeover with our glam squad before taking part in a photo shoot for the magazine.

If you want to nominate a mum then fill in the form here.

To enter, upload a photograph of the mum you are nominating and explain why they deserve to win.

The deadline for entries is Sunday February 14 and one winner and two runners-up will be announced on Sunday March 14. Good luck – we can’t wait to hear from you!

Little Heidie was born during lockdown on April 3.

Meanwhile, their eldest kids Chris, 31, and Sophie 26, have flown the nest, although frequently feature in the family’s videos and photos.

February 13: Mars and the moon make you a hopeless romantic

In other Radford news, an exhausted Sue Radford admitted that homeschooling “couldn’t get any worse.”

And the family showed off their new dining room this week.

Plus mum-of-22 Sue Radford reveals a bug is sweeping round the family in lockdown with several kids feeling sick.

The Radfords get epic takeaway with curry, pizza and milkshakes as mum-of-22 Sue buys new dining table…which only sits 14

The Baeumlers Update Their Wellington, Florida, Home in New Season